Imperial and Coachella valley farming operations supply much of the green produce consumed in the nation. More than half the green vegetables we eat during winter months are grown within these valleys. Agriculture is the largest industry in Imperial County and generates more than $1.75 billion in annual revenue, providing one in three jobs to local residents.

One of the key foundations of this economy is the All-American Canal. The eighty-two mile-long aqueduct serves as the distribution system for a complex array of water rights, delivering almost twenty-five percent of the Colorado’s annual flow to the farms and operations it services since 1942. The canal was built as part of the Boulder Canyon Dam Project Act (later renamed Hoover Dam), which began construction in 1932. Christened as the “All-American” Canal because the waterway lies entirely within U.S. soil unlike the California Development Company’s initial supply canal, which originated in Mexico. The Imperial Valley with 500,000 acres of irrigated fields is home to “one of the most complex hydraulic engineering projects in the world, with nearly 1,700 miles of canals and more than 32,000 miles of sub-surface tile drains.” [1]

About one ton of salt per acre-foot of water is contained within the waters of the Colorado River posing a threat to agriculture productivity without adequate drainage. To compensate, Imperial Valley farmers must flush their fields to avoid the build up of salts, minerals, excess nutrients, heavy metals, and other contaminants within the soil. Historically, for every three acre-feet of water applied to fields, approximately one-acre foot made its way to the Salton Sea. [2] Although this runoff has sustained the sea's water level in the past and indeed, at times overwhelmed it, a looming regional water transfer will soon change the equation.

In 2003, an agreement was reached between the Imperial Irrigation District (IID), the San Diego County Water Authority (SDCWA), the Coachella Valley Water District (CVWD) and the Metropolitan Water District of Southern California, which provides much of the drinking water to the Southland. The Quantification Settlement Agreement (QSA) resolved long disputed Colorado River rights and addressed that the fact that Southern California was using far more than its annually allocated 4.4 million acre-foot apportionment. To avoid future overdrafts by the state, the agreement provides for the eventual transfer of up to 30 million acre-feet of water used for past agricultural use to primarily urban use—the largest farm-to-city transfer in In U.S. history. Under the terms of the QSA, the IID will transfer up to 330,000 acre-feet of water per year of its 3.1 million Colorado River allocation to the three water districts with 200,000 acre-feet to be transferred annually to San Diego alone. [3] Once the transfer is fully implemented in 2028, agricultural inflow that sustains current sea levels is expected to be reduced from 1.36 million-acre feet of water a year to roughly half that amount causing the sea to shrink to about sixty percent of its current size, a reduction of about 100 square miles. [4]

Built into the QSA legislation was the requirement for mitigation of any environmental impacts that may result for the Salton Sea from the water transfer, providing measures and funding for the implementation of a restoration plan that would address water and air quality issues such as counteracting dust emissions resulting from a shrinking sea; minimize impacts on wildlife and provide viable habitat alternatives plus the creation of recreational opportunities and maintenance of those facilities.

In 2007, the state submitted an $8.9 billion preferred alternative restoration plan. To date, the California legislature has not acted nor set-aside funding for the proposed plan. Currently, the IID is required to supply mitigation water to help alleviate further increases in the sea’s salinity level and is required to do so until 2018 when restoration efforts were scheduled to implemented. If no restoration alternative is begun then the water is essentially wasted—at a cost of $61 million paid to farmers to fallow their fields that could be spent directly on the creation of wildlife habitat and dust mitigation efforts presently. 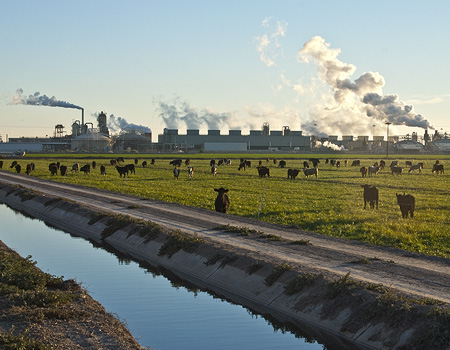 Cattle grazing in field with geothermal plant in distance, 2004. Click for larger image.