Bombay Beach is probably one of the more surreal locations at the Salton Sea. This tiny town located at the mid-eastern shore of the sea was a once popular recreation destination sporting several boat launches, bait and tackle shops, bars, restaurants, churches, and mobile vacation homes.

Lying 223 feet below sea level, the community fell victim to rising lake levels throughout the 1970s and 80s due to excessive agricultural wastewater discharges from Imperial Valley farms in conjunction with higher-than-normal seasonal storm runoff entering the sea. An earthen berm was constructed to help protect the homes and business from further flooding but as severe damage had already rendered most affected sites uninhabitable, many were eventually abandoned by the late 1980s. Dilapidated structures and vehicles in various stages of decay are open to those curious enough to explore or vandalize. One such structure—a picturesque abandoned travel trailer—is considered to be the most photographed one of its kind. As of 2013, all that remains of the trailer is an unrecognizable heap of debris. People continue to fish at the public beach although the catch is limited to mostly tilapia rather than the larger corvina and other sport fishes that the area was known for in better times.

The 2010 census listed the town’s population count as 295, down from 366 in 2000. Although the number of residents has dwindled over the years, the town continues to be known for its colorful array of characters such as “Hunky Daddy” aka Lasszlo Oros made famous by the quirky 2006 film, Plagues & Pleasures On The Salton Sea narrated by cult film director, John Waters.

When visiting Bombay Beach be sure to stop at the Ski Inn for lunch and a cold beer. The bar is located to the left as you enter town. 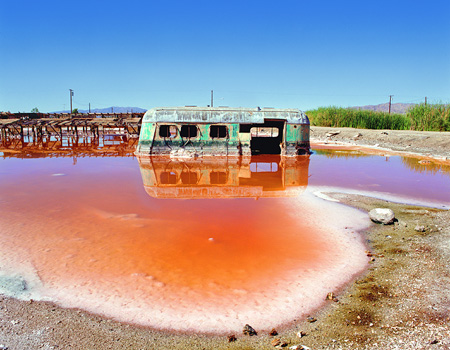