With the Great Flood of 1905–06 came a variety of freshwater fish. The majority perished over time as the sediment-laden waters of the Colorado mingled with soluble mineral deposits of the sink, creating a saline environment inhospitable for many freshwater fish species. Early on, striped mullet had migrated up the Colorado River from the Gulf of California making their way into the sea until the Imperial Dam blocked their passage in 1938. After failed attempts to stock silver salmon and striped bass, a viable sports fishery was finally established in the 1950s by the California Department of Fish and Game. A variety of saltwater tolerant species, such as orangemouth corvina, Gulf croaker, and sargo, were successfully stocked and before long the Salton Sea became known as one of the most productive fisheries in California—a favorite too, among regional anglers.

One abundant fish species present at the sea was unintentionally stocked. The tilapia (family Cichlidae) is a small- to medium-sized fish originally from tropical and sub-tropical Africa. Resembling the North American sunfish, the tilapia is commercially farmed throughout the world and widely consumed homes and restaurants. Religious scholars believe Christ fed tilapia to his followers. Although most cichlids prefer a freshwater habitat, some species show a tolerance for saltwater—as can be seen at Salton Sea.

The first tilapia population found outside a controlled environment in California was identified in a small pond and its tributary near the Hot Mineral Spa outside the town of Niland in 1964. This group of about 5,000 fish were poisoned with rotenone in a failed eradication attempt and by the mid-1970s tilapia had firmly established themselves in the Salton Sea. [1] Their success came at the expense of the only native species of fish in the sea, the tiny desert pupfish. Listed as a federally endangered species since 1986, native pupfish populations declined sharply as a result of the involuntary introduction of exotic fish such as tilapia, although in recent years they seem to have made a partial recovery. [2]

Around 1996, tilapia began to die mysteriously by the thousands. On August 4, 1999, the number of fatalities reached its record of more than 7.6 million fish per day. [3] Millions of rotting fish carcasses floated across the water's surface or were strewn along the beaches. In the past large numbers of tilapia, which cannot survive in water cooler than fifty-five degrees Fahrenheit, had died due to fluctuations in water temperature. However, scientists ruled out the possibility of a temperature drop for this particular incident.

Eventually, this die-off event was attributed to eutrophic conditions caused by periodic algal blooms that are stimulated by nutrient-rich agricultural runoff containing excess amounts of nitrogen and phosphorus found in industrial grade fertilizers. During the eutrophic process, microscopic algae deplete the oxygen in the water as they die and decompose. The result is an anoxic state where breathable oxygen is present only in the first inch of surface water. During this process fish simply drown with their decomposing flesh adding to the water’s already overburdened nutrient load, thus perpetuating a unrelenting of cycle of death. This process periodically overwhelms the entire ecology of the Salton Sea, especially during hot summer months, creating a prime habitat for botulism and other bacterial infections. [4] When fish harboring the botulism bacterium sicken and die they rise to the water’s surface. Fish-eating birds then consume the diseased fish spreading the botulism outbreak among the avian popualtion causing a related cycle of bird deaths.

One particularly unpleasant side effect of this process is the unforgettable stench that occasionally reaches Palm Springs, fifty miles to the north. More recently, the smell has traveled as far away as Los Angeles, 150 miles away. Researchers have shown that hydrogen sulfide emissions, a by-product of decaying matter at the sea's bottom are at times released during turbulent lake activity possibly contributing to die-off events as well as the random noxious odor occurrences happening more frequently at the sea.

The orangemouth corvina and other stocked sports fishes have, for the most part, died out, leaving the amazingly invincible tilapia as the sea’s primary ichthyic species. However, once the sea’s salinity reaches upwards 60 parts per thousand (ppt) scientists anticipate that the fishery currently sustaining the piscivorous bird population will collapse entirely. It should be noted that in 2013, salinity at the sea measured approximately 50-53 ppt. In contrast, the Pacific Ocean is currently 35 ppt. [5]

The Salton Sea SRA offers overnight fee camping with beach access. The park headquarters has an informative interpretive center open on a seasonal basis. For information and directions, visit: http://www.parks.ca.gov/?page_id=639.

[1] J. A. St. Amant, “Addition of Tilapia mossambica Peters to the California fauna,” California Fish and Game 52, (1966), 54-55.
[ 2] Jack Crayon, Associate Biologist, Department of Fish and Game, interview with author, July 9, 2004. Crayon states: “They [pupfish] are currently doing much better than in recent years, in spite of increased numbers of exotic fish in the drains to compete with them. Early suggestions that tilapia were capable of reducing their numbers have not been born out over time.”
[ 3] Diana Marcum, “7.6 Million Fish Die in a Day at Salton Sea,” Los Angeles Times, August 12, 2000.
[4] For more information on this topic, please visit the Microsalton section of this website.
[5] Kelly Bishop, Jessica Lovecchio, and Bruce Wilcox, “Ongoing Effort To Save The Salton Sea,” The Desert Report, December 2012, 3. 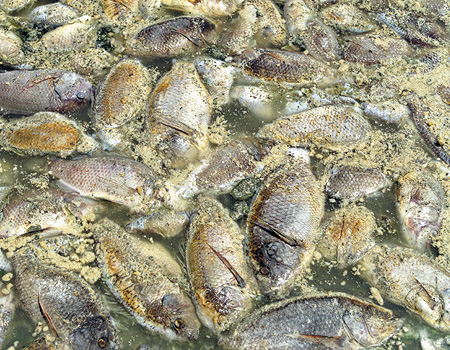