Leonard Knight is the visionary creator of Salvation Mountain. Located at the entrance of Slab City near the “seen better days” town of Niland, California this large-scale religiously themed structure is impossible to miss. Folks have made pilgrimages from all other the globe to view and walk the mountain and, more importantly, visit with its creator.

Salvation Mountain is a wonderfully odd, but highly inspirational public art installation constructed nearly single-handedly by Knight from straw, locally sourced adobe mud and discarded house paint over a nearly thirty-year period. Leonard began construction of the mountain in 1985. After five years of hard labor the mountain collapsed due to lack of structural integrity. Undeterred, Leonard began reform the mountain a second time, fashioning the relief with a stronger application of hand-mixed adobe, completing his sculpture in a colorful pastel palette from the thousands of gallons house paint donated by his frequent visitors and fans. To this day thousands of people have traveled annually to this area just to visit Salvation Mountain.

The main focal point of the installation is the brightly painted “God is Love” message. Below this statement and within a crimson heart is inscribed; “Jesus, I'm a sinner. Please come upon my body and into my heart.” Everywhere the eye travels, brightly painted waterfalls, flowers, birds and biblical references abound. Leonard could still be seen working diligently at the site, repairing or repainting the mountain until 2011, when at age eighty, he was relocated to an elder care facility near San Diego. When asked if he considered himself an artist he simply explained that he "works with the mountain and doesn't try to control it," suggesting that another presence other than himself directed him to continue his work.

During my early visits, I was always taken with the fact that Leonard did not believe in "preaching on the mountain." He once explained that he was disappointed with religious groups who try to claim his creation for their own personal missions and institutions. He preferred not to be associated with any particular faith and actually said once that "it doesn't matter if you are Christian, a Buddhist or whatever"—it was important to know that "God is Love." Obviously he was a man who loved and respected all forms of spirituality.

A later addition to the site was a constructed straw bale wonderland featuring a design that for me surpasses the mountain itself. This maze-like domed structure is full of architectural innovation and surprises. Knight’s incorporation of sustainably salvaged refuse including car doors, windshields, and an entire fallen tree is as “green” as anything I’ve encountered. Of course, it was lovingly painted in Leonard’s capricious signature style featuring an abundance of blue birds in addition to his whimsical religious symbolism. The Folk Art Society of America declared his creation "a folk art site worthy of preservation and protection" in 2000. Later, in 2002, California Senator Barbara Boxer called it as "a unique and visionary sculpture...a national treasure...profoundly strange and beautifully accessible, and worthy of the international acclaim it receives." [1]

Strangely enough, Salvation Mountain has had its share of detractors in the past—in 1994, a group of overly zealous environmentalists intervened claiming that his creation was a “toxic nightmare.” They lobbied for the mountain’s destruction after grounds testing suggested heavy metal contamination. Leonard decided to collect soil samples from the same “twelve holes that they dug” and preceded to have his own tests done in a private lab in San Diego. His results came out negative thus ending the controversy.

Visitors continue to arrive from all over the world to view Leonard’s creation firsthand. Today, a group of dedicated volunteers work to protect the mountain Leonard created from vandalism and harsh desert environmental forces. In recent years a non-profit was established with Leonard's blessing to oversee financial support to maintain and preserve the mountain. Still, much is unknown about the fate of Knight's creation. The California State Lands Commission is not certain if the state actually owns the land it sits on (nearby Slab City lies on state holdings) so the future of Knight's inspirational earthwork is precarious indeed.

On Monday, February 10th, 2014, Leonard Knight at age 82 passed—away from his beloved mountain under the care of people who loved him. He will be missed. 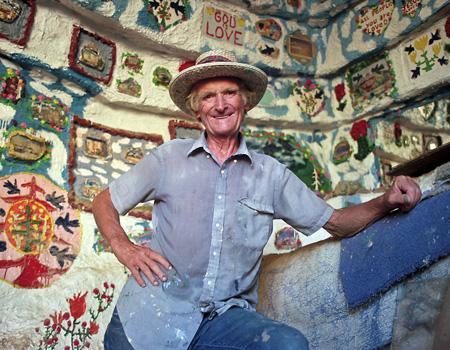