The Salton Buttes are a group of five young volcanoes located along the southeastern edge of the Salton Sea that include Mullet Island, Red Island (two domes), Rock Hill, and Obsidian Butte. The two domes of Red Island are linked by subaqueous pyroclastic deposits with the three additional volcanoes single extrusions with or without minor lava flows. Mullet Island is unique for its symmetrical “onion-skin” pattern of foliation, attributed to endogenous or interior growth patterns. It is noted that several warm springs rich in CO2 occur on the northeast side of the island.

The Salton Buttes were until recently believed to have last erupted 30,000 years ago. The journal Geology reported that scientists now conclude that volcanic activity most recently occurred between 940 and 0 B.C. making these volcanoes some of California’s youngest. The USGS currently monitors all potentially active volcanoes in the state.

Native American artifacts collected in and around the region include projectiles crafted from Obsidian Butte glass by the Kumeyaay people, whose territory ranged from the coast to the Coso Mountains. Obsidian Butte glass artifacts began appearing in village sites around 510 B.C. to 640 B.C.—but not earlier—suggesting that the material in which those items were created from was not available before 1000 B.C. Researchers assumed that an occurrence of Lake Cahuilla covered Obsidian Butte thus making it impossible for the Indians to collect obsidian from this particular location. More recently this explanation has been disputed and proven false.

Underneath the Salton Sea is a magma chamber supplying the lava source for the volcanoes that, in addition, heats brines found 1 to 1.5 miles deep below the earth’s surface up to 680 degrees Fahrenheit which are sourced for Imperial Valley’s geothermal plants—considered one of the largest geothermal potentials in the world. Currently, three major geothermal energy production sites are located north of Calipatria with the largest group of seven plants owned by CalEnergy.

Extracted super-heated brines produce steam that power electrical generators capable of producing enough electricity to power up to 100,000 homes. In addition, brines contain enormous amounts of mineral salts and metals, including copper, manganese, lithium and silver that can wreck havoc with the steam turbines. Impurities must be separated from the extracted fluid producing a toxic byproduct that must be injected back deep into the ground for disposal. An economic potential exists for those successful in separating the more valuable impurities such as lithium from the industrial waste products;  a commercial lithium mining start-up hatched by the Lawrence Livermore National Laboratory is currently doing so near Brawley. Pilot projects harnessing geothermal technology for saltwater desalination are currently under development in an effort to curtain ever-increasing hypersalinity at the sea.

With a network of active earthquake faults throughout this rift zone, it should come as no surprise that industrial geothermal drilling conducted deep within the earth’s mantle could produce thousands of small earthquakes that are proportional to the amounts of water injected and extracted in the process of producing energy. A July 2013 study stated that, “for every half a billion gallons of water that was removed from the ground and not put back, an average of one detectable earthquake resulted every eleven days, many of them tiny quakes.” [1]

Indeed, geologists have now linked the ancient ephemeral lakes within the Salton Trough with earth movements over time. With the massive 800 mile-long San Andreas beginning its extension northward just east of the sea along the Chocolate Mountains, earthquakes of 7.0 magnitudes or larger have regularly hit the region every 180 years with the last major one striking 325 years ago. [2] It is believed that periodic flooding of the basin exacerbates fault strands of the San Andreas found under the Salton Sea and, in combination with other area faults, has contributed to the spat of recent earthquake swarms that continue to batter region on a regular basis. Researchers have also suggested that volcanic sulfuric gasses released during these seismic events may be related to the wide spread of noxious odors that have occurred sporadically in Southern California in recent years.

Red Island is accessible by car and has areas to hike and camp. To get there, head west on Sinclair Road from Highway 111 (just south of Niland) following the signs for the Sonny Bono Salton Sea National Wildlife Refuge/Red Hill Marina. At Garst Road, turn right until you reach Red Hill Road, which will lead you to the island. Note that this route allows you to view the various geothermal facilities in the area while you traverse westward on Sinclair Road. Rock Hill is located at the end of Sinclair Road (take a right at Gentry) and is part of the of the trail system at the Sonny Bono Salton Sea National Wildlife Refuge. Access Obsidian Butte by heading south on Boyle Road from Sinclair (take a right at McNerney).

The publicly accessible mudpots can be viewed at the intersection of Davis and Schrimpf Roads in Calipatria, CA 92233. 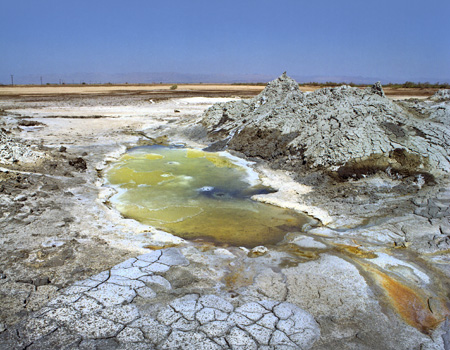