The Salton Sea is a terminal lake with no outlet about thirty-five miles long and fifteen miles wide covering a surface area of 376 square miles. The lake's total volume is currently around 7.5 million acre-feet and with an average depth of thirty feet—making it is quite shallow for its size. With its surface positioned 226 feet below sea level, temperatures in this exceptionally hot, arid basin often exceed 120 degrees Fahrenheit during summer months. Consequently, the average rate of precipitation in the region is less than three inches per year.

Until the late-2000s, lake levels were primarily sustained from agricultural inflows from three rivers; the Whitewater at the northern end of the sea and the Alamo and New rivers to the south. Runoff from rare seasonal flash floods and seepage from the All-American Canal has added additional replenishment to this body of water. [1] Until recently, inflows were on average 1.36 million acre-feet (maf) per year consisting mostly of agricultural runoff that historically provided more than ninety percent of the sea’s yearly inflow. However, as a scheduled regional water transfer goes into full effect within fifteen years more than forty percent of current inflows will cease, causing the sea to shrink to about sixty percent of its current size—roughly a reduction of about 100 square miles. [2]

With no drainage outlet in this closed system, water escapes only through evaporation while salts and other minerals from agricultural wastewater accumulate in increasingly concentrated amounts, never leaving the system. The extreme environment of the Salton Sea clearly exacerbates this process. Dr. Milton Friend, the former executive director of the Salton Sea Science Subcommittee stated in 1999 that “the salt load entering the sea through this system is equivalent to a train load of boxcars one mile long, full of salt, depositing their load in the sea every day, 365 days a year. This amounts to 5.2 million tons of salt annually.” [3] Note that Friend’s statistic was based on estimated inflows totaling 1.36 maf per year that are now reduced. As the sea shrinks in size, salinity per volume will compound exponentially. Current salinity levels at the sea are now approximately 50-53 parts per thousand (ppt) making it more than twenty-five percent saltier than the Pacific Ocean. Biologists state that, when the concentration reaches 50 ppt, the sports fisheries will cease to reproduce, and at 60 ppt the majority of the fish will be dead.

Various restoration plans have been proposed over the years to alleviate or possibly solve the ecological and socioeconomic problems of the Salton Sea and its environs. The majority of these restoration projects emphasize salinity control because without human intervention the sea will transform into a very different ecosystem over time.

When considering this dilemma one should note that the concentration of salts within a desert body of water is a naturally anticipated transformative process that can be seen throughout the arid western United States; Mono Lake in the Eastern Sierra is now at 87 ppt and the Great Salt Lake in Utah measures 280 ppt. [4] When the Salton Sea reaches this level of hypersalinity—brine shrimp, flies, and other insects will continue to support a new array of avian species such as invertebrate-eating eared grebes and Wilson’s Phalarope—while piscivorous species, including brown pelicans and cormorants, whose dependence on the sea’s current environmental conditions and its fish would have long moved on to other regional habitat in their quest to find a new source of sustenance. That is, if these areas still exist in the future.

[1] One of the components of the 2003 Quantification Settlement Agreement (QSA) required the IID to concrete line the earthen bottom All-American canal to prevent seepage that historically amounted to approximately 68,000 acre feet a year. Much of this water supported agriculture in the Mexicali Valley, however, a significant amount also sustained the Salton Sea.
[2] Michael J. Cohen and Karen H. Hyn, “Hazard: The Future of the Salton Sea With No Restoration Project, Pacific Institute, May 2006, i.
[3] Dr. Milton Friend, Salton Sea Science Subcommittee, “The Salton Sea—What Is The Big Deal?” presented at the U.S. Geological Survey National Headquarters, Reston, Virginia, 1999.
[4] Salton Sea Authority website. See: http://saltonsea.ca.gov/about-the-sea.html. 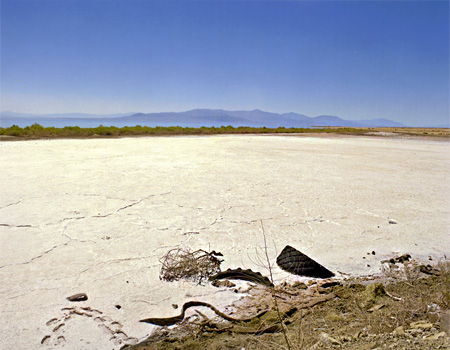