Originally from St. Petersburg, Dr. Victoria Matey and her late husband, Dr. Boris Kuperman were part of the biology research faculty at San Diego State University's Center for Inland Waters. The couple specialized in the study of ecological parasitology of fish, crustaceans and mollusks, biomonitoring of water quality as well as fish diseases, pathology and other biological studies related to fish.

I first came across their work during my first semester working as an assistant professor at SDSU in 2001. After viewing a display of their Salton Sea research project in the biology building’s hallway, I decided to contact them to learn more.

At our first meeting I was warmly received by the two of them. They shared with me their stunning collection of scanning microscope images revealing parasite infestations of tilapia and other aquatic species found at the sea. I shared my own project with them and we discussed the Salton, comparing it with the Aral Sea—an environmental disaster they were all too familiar with. It was fascinating to hear their comments and concerns for the area after having witnessed such similar ecological devastation in the former Soviet Union. On one particular occasion I visited their office only to find campus construction workers tearing a hole through their office ceiling. I inquired if the Kupermans thought there might be asbestos up above. With a wink, Victoria commented, “it doesn't matter—we're from Russia!”

During 1997 to 1999, the Kupermans carried out parasitological monitoring at the Sea at four locations: Varner Harbor, Bombay Beach, Red Hill and Salton City. Several fish species, including young tilapia (Oreochromis mossambicus) were found infected with ectoparasites. The parasites were limited to three protozoan species, Amyloodinium ocellatum (Dinoflagellida), Ambiphrya ameiuri (Peritricha), Cryptobia branchialis (Bodonida: Kinetoplastida), and metazoans, the monogeneans Gyrodactylus olsoni and G. imperialis. [1] Their Salton Sea study demonstrated how high parasite loads caused severe damage to respiratory organs (such as gills and skin) that, in turn, could lead to depressed respiration and osmoregulation. When combined with other environmental factors the parasite infestations caused fish suffocation and death, primarily affecting the juvenile fish populations.

When viewing these microscopic images it is hard to not see incredible beauty in the strange forms. Victoria is especially aware of the aesthetic quality of the tiny creatures she photographs and talks in detail of the beauty found in the images. Her scientific research is greatly informed by aesthetics and she sees no conflict with this approach.

I regret to say that on August 10, 2002 Dr. Boris Kuperman passed away. His wife, Dr. Victoria Matey, continued with their research studies until she retired from SDSU. Although I did not know Boris well, I must say that I was quite taken by his generosity and kindness. 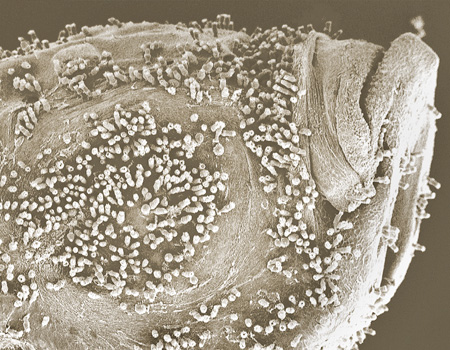