If the Salton Sea is simply allowed to dry up and return to its “natural” state, a desiccated lakebed could potentially engender a dangerous level of toxic airborne particulate matter that would most certainly be dispersed throughout the region as the sea's shoreline recedes affecting the communities of San Diego, Palm Springs the Inland Empire, and beyond.

This pattern can be observed at Owens Dry Lake, east of Mt. Whitney in California's Eastern Sierra and at the Aral Sea in Central Asia. Owens Lake was drained for municipal water use by greater Los Angeles after the completion of the Los Angeles Aqueduct in 1913. [1] The Los Angeles Department of Water and Power has since been forced to release water back into the dry Owens lakebed in an effort to reduce PM10 (particulate matter finer than ten microns) affecting the health of both human and animal populations. This effort is part of an initial $400 million project aimed to alleviate what is considered by the EPA to be the nation's worst particulate air pollution problem.

With the implementation of the regional water transfer it is projected that by 2018 serious air quality problems will result as an additional twenty-six square miles of the Salton seabed is exposed to high winds adding an extra load of seventeen tons of daily PM10 dust emissions to the already excessive amounts found throughout this region. [2] Imperial County aside, residents of Coachella Valley, especially those in affluent Palm Desert and surrounding communities, with their abundance of shockingly green golf courses, have been forewarned that the potential for high winds moving across the dry seabed will stir up a toxic mix of airborne dust that will affect the sanctity of their million-dollar-plus gated communities. This likely scenario will definitely negatively affect their current leisure-oriented lifestyles and take a heavy toll on their property values.

Still, a more urgent concern—and one often easier to overlook due to their proximity as well as the economic hierarchy of the region—is the effect these dust storms will have on the residents and farmworkers immediately surrounding the Salton Sea. Imperial County continues to have the highest rate of unemployment in California and possibly in the nation, at 28.3 percent—a grim statistic that does not permit those already living there to relocate. [3] Children of Imperial County are also of great concern as hospitalization rates for asthma in this group are consistently the highest among all California counties. [4] 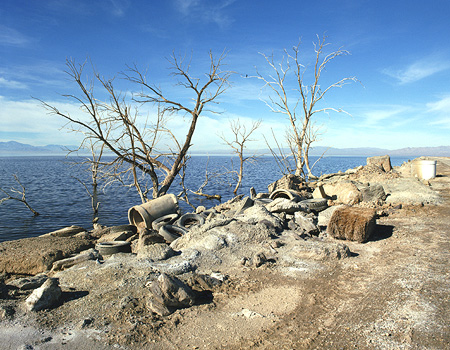