The infamous New River was forged from a dry river channel during the creation flood of 1905-06. Originating about twenty miles south of the international border at Mexicali, the New River flows northward into the United States at Calexico. From there, the river travels about sixty-seven miles through the Imperial Valley before emptying into the Salton Sea.

The New River is considered the most polluted waterway in North America. Nearly thirty-five percent of the total water entering the Salton Sea has historically resulted from New River inflows—one-third of which originated in Mexico. [1] The river’s primary source is irrigation wastewater containing pesticide residues from large-scale agricultural operations on both sides of the border. In addition, highly polluted discharges from maquiladoras (transnational manufacturing plants) located in Mexicali; raw or inadequately treated sewage from Mexico, including leachate from landfills, phosphate detergents, various caustic chemicals, industrial effluent, slaughterhouse wastes with other miscellaneous trash make up this toxic stew. Reports have noted children swimming and playing in the river downstream of Mexicali’s maquiladoras and other industrial enterprises amid floating sewage. [2]

Until recently, one could observe “islands” of phosphate-laden foam drifting towards the sea; an unsettling, yet strangely beautiful vision. Although Mexicali’s existing wastewater treatment plant was improved with funds jointly provided by the U.S. and Mexico in the 1990s, it was only capable of partially processing its discharged effluent. In the past, overflows routinely entered the waterway; up to thirteen percent of Mexicali’s raw and partially sewage accounted for the river’s total flow. [3] Las Arenitas, a newer Mexicali wastewater treatment plant completed in 2007, processes an estimated 15 million gallons per day of sewage that once flowed directly into the New River. Now released into the Rio Hardy, a tributary of the lower Colorado River, this reclaimed wastewater currently provides a meager water source for much needed wetland habitat revitalization in a northwest section of the Colorado River Delta in Mexico. The plant reduces phosphates and bacteria from entering the New River but, in turn, cuts back flows to the Salton Sea that would help maintain its current level.

In the 1990s, Mexicali police reported that a human body found floating in the river on the Mexican side was at first believed to have had been burned to death, “but they later discovered the chemicals in the New River had simply eaten the flesh from his bones.” [4] The homeless and those waiting to cross the border often pitch camps along the river’s banks and, out of necessity, end up using the polluted river water for drinking, bathing, and other domestic activities.

When Clinton-era Operation Gatekeeper ushered in heightened border security during the 1990s, the New River increasingly became a popular entry point for those crossing illicitly into the U.S. News reports have estimated that fifty to one hundred people enter the river each night in their attempt to cross the border. [5] Immigration and Naturalization Service agents and local law enforcement refuse to enter the waterway for fear of being contaminated. On the other hand, migrants enter the river nearly naked with their clothes and few belongings stowed in plastic bags, navigating the river in crude flotillas. If any are by chance exposed to the array of pathogens or communicable diseases while crossing—each one potentially can spread infectious agents to other regions as they travel to more populated urban centers.

Pathogenic microorganisms capable of causing typhoid, encephalitis, polio, salmonella, polio, e. coli, hepatitis, cholera, and tuberculosis are known to exist in the river. Extreme levels of fecal coliform have been repeatedly measured in the river near the International border. DDT, PCBs, VOCs, and o1,1,1,-trichloroethane, toluene and xylene are also present in alarming levels. It should be noted, however, that most of these contaminants, pollutants and other harmful bacteria dissipate through natural processes before reaching the sea.

Two successful constructed wetland pilot remediation projects were completed in 2000 in an effort to improve water quality at both the New and Alamo Rivers near the towns of Imperial and Brawley. Both wetland projects resulted in the removal of up to ninety percent of suspended sediments and pathogens from these waterways. The larger Imperial Project receives water from agricultural runoff from the Imperial Valley. The smaller New River Wetland Project located near Brawley receives flows from its namesake river and can be visited daily. For information on birding and directions, visit: http://www.southwestbirders.com/new%20river%202001.htm. 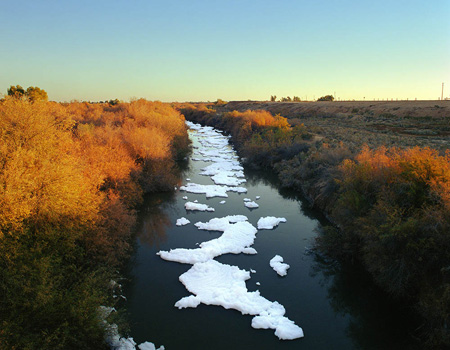 The New River, near Brawley, CA 2001. Click for larger image.