Wintering waterfowl began flocking to the sea almost immediately after its formation in 1905-06. Before long, the area proved to be a major stopover destination for migrating birds. Shown to have a greater diversity of avian species than that of the Florida Everglades, the Salton Sea is a vital habitat for more than 400 species of birds making it a one of North America's premier birding locations.

The sea today provides an important wintering habitat and food source for more than 2.5 million ducks, geese, grebes, and other migratory species as well as year-round habitat for a variety of resident species including endangered brown pelican and federally endangered Yuma clapper rail. With the Colorado River estuary strangled to a mere trickle and up to ninety-eight percent of California interior wetlands lost to human development, the Salton Sea provides much-needed habitat for birds traveling along the state's Pacific Flyway migratory route.

Beginning in 1987, biologists began to find record numbers of dead birds littering the shoreline. Throughout the 1990s into the 2000s, a series of highly publicized bird fatality events occurring at the sea resulting from avian cholera, Newcastle’s disease, and avian botulism made major news headlines. These ominous disease outbreaks claimed the lives of thousands of grebes, white and brown pelicans, double-crested cormorants, ducks, geese, and other avian species. In 1996, 8,500 white pelicans, fifteen to twenty percent of the entire Western population, sickened and died. [2] That same year, 1,600 endangered brown pelicans died—the largest recorded loss for an endangered species at the time. [3] In 1997, the first recorded outbreak of Newcastle’s disease west of the Rockies occurred on Mullet Island, killing 2,000 nesting and juvenile double-crested cormorants, virtually the entire hatch for that season. [4] The majority of the deaths were attributed to a repetitious cycle of infectious disease within the sea’s ecosystem; sick and dying fish infested with parasites, maggots and other carrion-eating insects were, in turn, fed on by healthy birds. These birds then became infected, ill, and consequently died thus repeating the vicious cycle of disease.

Field biologists were at first completely overwhelmed and underresourced to deal with the extensive die-offs but managed to cleanup hundreds of dead bird carcasses littering the shoreline and nurse those that had taken ill back to health. By 2001, trained personnel and volunteers had successfully rehabilitated close to seventy-five percent of diseased birds in a cooperative effort between the Salton Sea Authority and the U.S. Fish and Wildlife Service. [5]

Scientists studying the Salton Sea recognize its deteriorating water quality as the main culprit in the sharp increase of fish and bird diseases in the area. The sea's increasing salinity levels result from high annual evaporation rates within this terminal lake, which, in turn, contributes to the elevated concentration of salts and minerals within its waters overtime. This natural process is seen as one of the most significant factors contributing to the poor overall health of the sea. Experts agree that too much salt in the ecosystem makes fish more susceptible to disease. Now approximately 50-53 parts per thousand (ppt) once the Salton Sea reaches upwards 60 ppt scientists anticipate that the fishery will collapse entirely resulting in consequent loss of food sources for the area's fish-eating bird population. [6]

Salt is not the only culprit, however. Fertilizers, pesticides, and selenium contained in agricultural runoff are concentrated in sediments found at the bottom of the sea. Pile worms and other invertebrates ingest the selenium-contaminated sediment and are, in turn, eaten by fish. Birds feeding on these selenium-tainted fish are potenially poisoned through bioaccumulation.

Although selenium is a naturally occurring trace mineral necessary for normal metabolic function, at higher concentrations it can cause birth defects and fatalities. A publication put out by the U.S. Bureau of Reclamation explains: “Contamination occurs as lower food chain organisms accumulate selenium to higher levels than their surroundings and are fed upon by a higher food chain organism. With each succeeding level, selenium concentration magnifies. At greater risk are the larger fish-eating birds such as the double-crested cormorant, great blue heron, and the cattle egret which have fairly long food chains.” [7] Birds and wildlife frequenting constructed wetland remediation sites along the sea's shoreline are particularly susceptible to selenium bioaccumulation and contamination. Studies are currently underway to determine ecological risks from selenium concentration in these areas. As the Salton Sea continues to shrink in size from the slated regional water transfer, selenium management will become an increasingly important issue to address.

As avian habitat at the Salton Sea further degrades due to a combination of natural and human-induced factors—birds, both resident and those traveling along this migratory route will be peril unless steps are taken to remediate, protect and secure future viable habitat alternatives at the Salton Sea or the ecologically marginalized Colorado River Estuary. 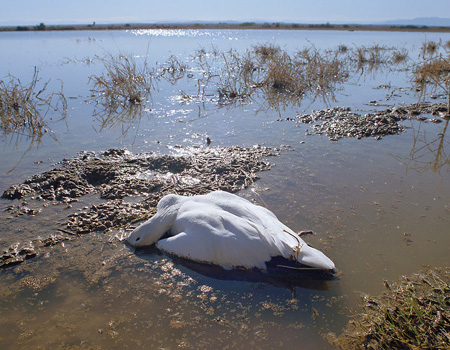