The Salton Sea has attracted its share of rugged souls including Captain Charles E. Davis, a general all-around adventurer originally from Massachusetts who panned for gold in Alaska and survived the Great Galveston Flood of 1900 only to homestead on a dormant volcano within the Salton Sink that metamorphosed into an island pennisula after the Salton Sea was created in 1905-06. Undeterred, Davis began to build a cabin and by 1908, he had added a boat landing, cafe and dance hall. “Hell's Kitchen,” as it was locally known, became a flourishing and popular establishment under his management that prospered for nearly a quarter of a century. Today, all that remains of Hell's Kitchen are the building foundations and a few broken toilets.

A ruggedly handsome chap, Captain Davis gained a reputation as a perfect host; he sang old sea chanties and mining ballads at his piano, served hearty dinners and hosted dances on occasion. He also found time to dabble in local politics, worked as a game warden among other part-time occupations—all the while continuing to entertain the duck hunters, fishermen and others who visited his resort. Davis’ “alfalfa-fed mullet” was legendary with folks traveling miles away to purchase it.

At one point, as local legend has it, Davis imported a half dozen sea lions and released them into the sea near the island as a marketing scheme. The creatures proved unpopular with the local farmers; they blamed them for the disappearance of a few missing pigs demanding, in turn, that the creatures be destroyed. Without the farmers’ intervention the unfortunate sea lions did not survive long at the sea and died shortly thereafter. The introduction of the sea lions into the Salton Sea ecosystem is one of the more bizarre examples of its kind.

Another marketing endeavor of Davis’ involved the relocation of a large fishing barge from San Pedro to the sea. Davis intended to convert the barge into a showboat but it sank after being launched, effectively ending those plans. Some years later Davis became obsessed with the ill-fated Donner Party and began to paint primitive portrayals of the group with oil paints made from pigments gathered at the nearby onshore mudpots. Eventually this obsession led him to retrace the Donner Party's entire 2,000-mile trip from Independence, Missouri to Fort Sutter, California. During his journey, Davis collected artifacts, news clippings, maps with other ephemera that are supposedly still on display at the fort's museum.

Mullet Island was largely abandoned as a recreational development when the surface road connecting the peninsula to the mainland was flooded some years later beginning in 1948. Afterwards, birds, including double-crested cormorants, began to nest in significant numbers across the island. Today, as the sea’s shoreline recedes further—the result of a regional water transfer and natural forces, the island’s nesting cormorant, pelican and heron populations are increasingly made vulnerable to opportunist depredation from coyotes and raccoons. When the island is reunited with the mainland, birds and their young will be posed for attack from these predatory threats.

Research for this section was gathered from Pat Laflin’s wonderful historical essay, “The Salton Sea: California’s overlooked treasure,” published in 1995 for The Periscope, a publication of the Coachella Valley Historical Society located in Indio, California. 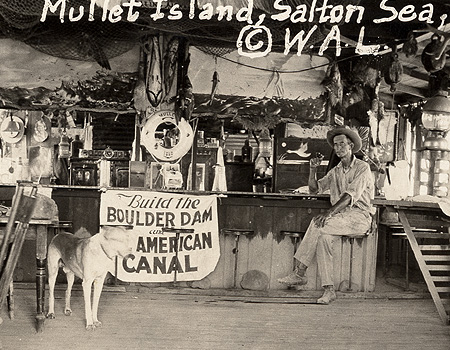